Things You Should Know About Kaws KAWS is not his real name

Brian Donnelly (b. 1974) studied illustration at the School of Visual Arts in New York. Before he achieved success as an artist he worked as a background painter on animated series such as Disney’s 101 Dalmations, and cult shows Daria  and Doug.

He started out as a graffiti artist

From an early age Donnelly was known for marking buildings in New Jersey and Manhattan with ‘KAWS’, a tag he chose because he liked the way the letters looked together. He soon moved on from this simple tag, however, and developed a unique style that involved adding cartoon-like figures to bus-shelter advertisements.

Later, he would replicate these early works of ‘subvertising’ in a series of screenprint lithographs. These included a mock Calvin Klein ad, featuring supermodel Christy Turlington being embraced by a green figure.

His origins in graffiti brought his work to a diverse audience, many of whom had nothing to do with the art world. Unlike most artists, KAWS did not start out with a gallery; he was fully aware of the benefits of showing his work in the street and mass-producing pieces in order to build a following. This following became so big that it attracted the attention of collectors and critics.

KAWS made his name with toys

In 1999 KAWS visited Japan after being approached by Bounty Hunter, the cult toy and streetwear brand. He would go on to create his first toy, ‘COMPANION’.

Produced in an edition of 500, the toys sold out almost immediately, and COMPANION became a recurring figure in KAWS’ work. 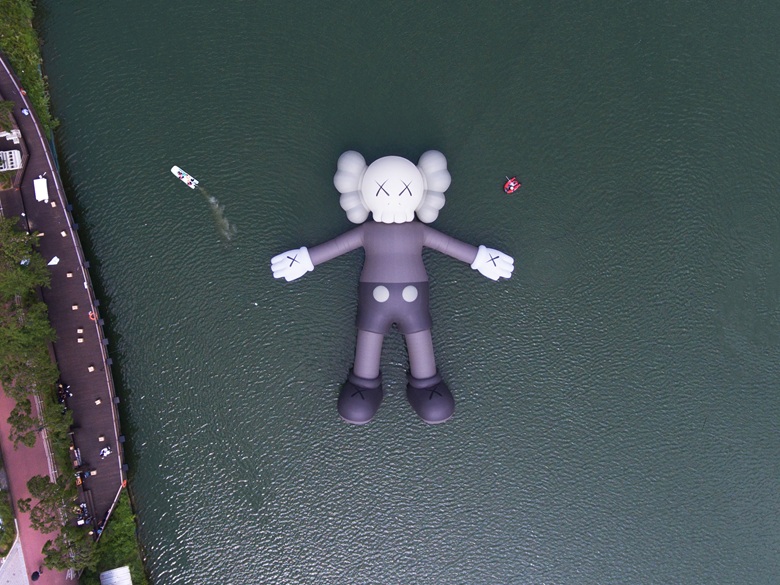 He’s having a moment

In March 2019, a 121-foot-long inflatable version of KAWS’ COMPANION  is set to be installed in Hong Kong’s Victoria Harbour during Art Basel. Anchored by a 40-ton weight, versions of the piece — dubbed KAWS: HOLIDAY — were previously on view in Seoul and Taipei, and mark the latest step in the artist’s rise to fame over recent years.

KAWS’ success on social media has been a big factor in his surge to the forefront of the contemporary art world. At the time of writing, more than 900,000 posts bearing the hashtag #kaws had been posted on Instagram, compared to 300,000 for Jeff Koons and 192,000 for Damien Hirst. Specialists have speculated that this could partly be down to the fact that his bright, Pop-art style reproduces faithfully online, but this popularity can also be attributed to KAWS’ origins as a street artist.