Best Sneakers Of The Decade

Just as fashion saw major shifts across all facets of business this past decade, so did footwear. Now a multi-hundred-billion dollar industry, footwear owes much of its meteoric rise to sneakers and its surrounding culture. Once a niche underground world living within long release lines and internet forums, this collecting subculture found its way into the mainstream, becoming the launching point for many young people’s infatuation with fashion.

Sneakerheads were thrusted into the global spotlight when certain coveted releases during the early part of the decade caused absolute pandemonium. News outlets, local and international, covered the chaos that ensued at malls and boutiques alike, from the overnight campers, to the fights, riots and arrests. Despite the apparent dangers however, people became fascinated by this world, the camaraderie it promotes and the status it brings. Now it seems everyone has a sneaker “collection” at home.

At the same time this mainstream adoption was happening, fashion and footwear were deep in a digital revolution, where blogs and ecommerce supplanted longstanding print publications and physical storefronts. Brands and retailers looked at the disarray that was now following traditional in-store releases, and began digitizing sneaker culture, creating social media communities, online raffle systems, augmented reality experiences and more.

Soon, demand for product, vintage and new, outgrew supply, leading to the secondary market boom of the latter half of the decade. It’s no longer just eBay and traveling conventions, but now there’s a whole stock market for sneakers, keeping track of their value in real time. Heritage auction houses like Sotheby’s have even brought their curatorial expertise and prestigious clientele to the reselling community, offering some of the rarest sneakers in the world to its most serious collectors.

The decade wasn’t all hype and digital reconstruction however, as the past 10 years also brought about some of the most advanced and rather necessary footwear innovations in history. From 3D-printed sneakers and auto-lacing systems, to sustainable, fully-recyclable footwear, the industry is primed for a bigger, brighter and more responsible future.

But before we enter the 2020s, we wanted to highlight some of the most influential sneakers of the last decade, kicks that have helped propel many of the aforementioned industry shifts. Here they are, the 12 most important sneakers of the 2010s in chronological order. 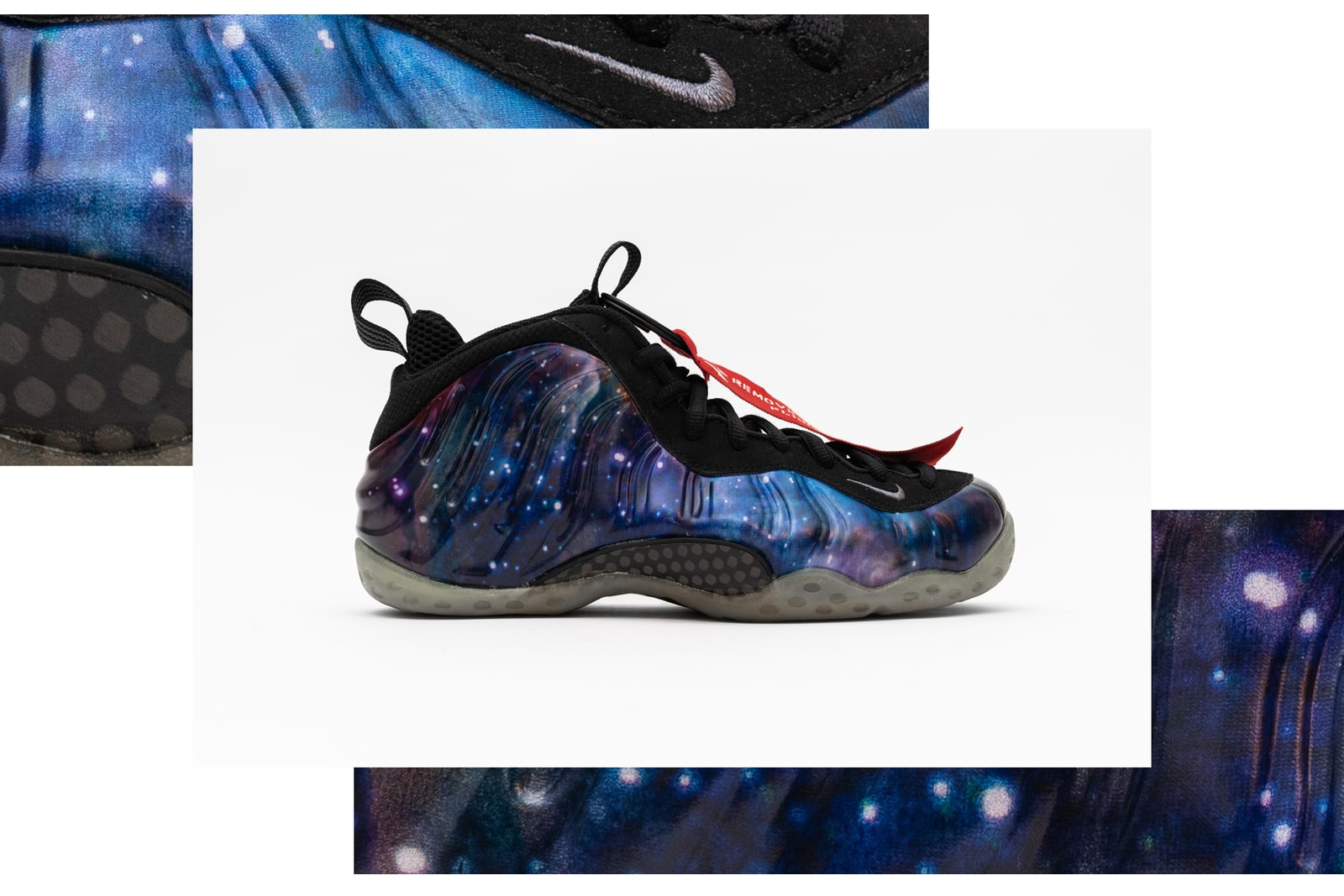 To start, this is really a combo entry, encompassing both Nike’s Air Foamposite One “Galaxy” and 2011’s Air Jordan 11 “Concord.” The AJ11 released in December with the Foamposites arriving two months later, both of which caused absolute pandemonium at stores all around the States. The hype around the first should be obvious: the “Concord” is one of the most iconic sneakers of all time and prior to 2011, it hadn’t seen retail shelves since 2001. The Foamposite on the other hand, was simply riding out a wave of popularity during the 2000s, peaking with these particular galactic theme (and later the “Paranormans”), its most ostentatious at the time.

Hundreds, if not thousands of people camped outside of any given store for these kicks, leading to fights, riots, arrests, cancelled releases, back-door sales, and threats against store clerks when supply did not meet demand. News outlets both local and national covered the chaos that ensured, turning the world onto the fanatic community of sneaker collectors.

The violence and negative publicity persuaded Nike and its retailer network to reconsider and restrategize how they release sneakers with hopes of making the process more inclusive and safer, while still maintaining its core values of community and fun. They may not be the sole causes, but these two releases didn’t just bring sneaker culture to the mainstream, they pushed for a digital revolution in footwear: where forums transitioned to social media; coveted drops landed on mobile applications; and AR replaced released lines. 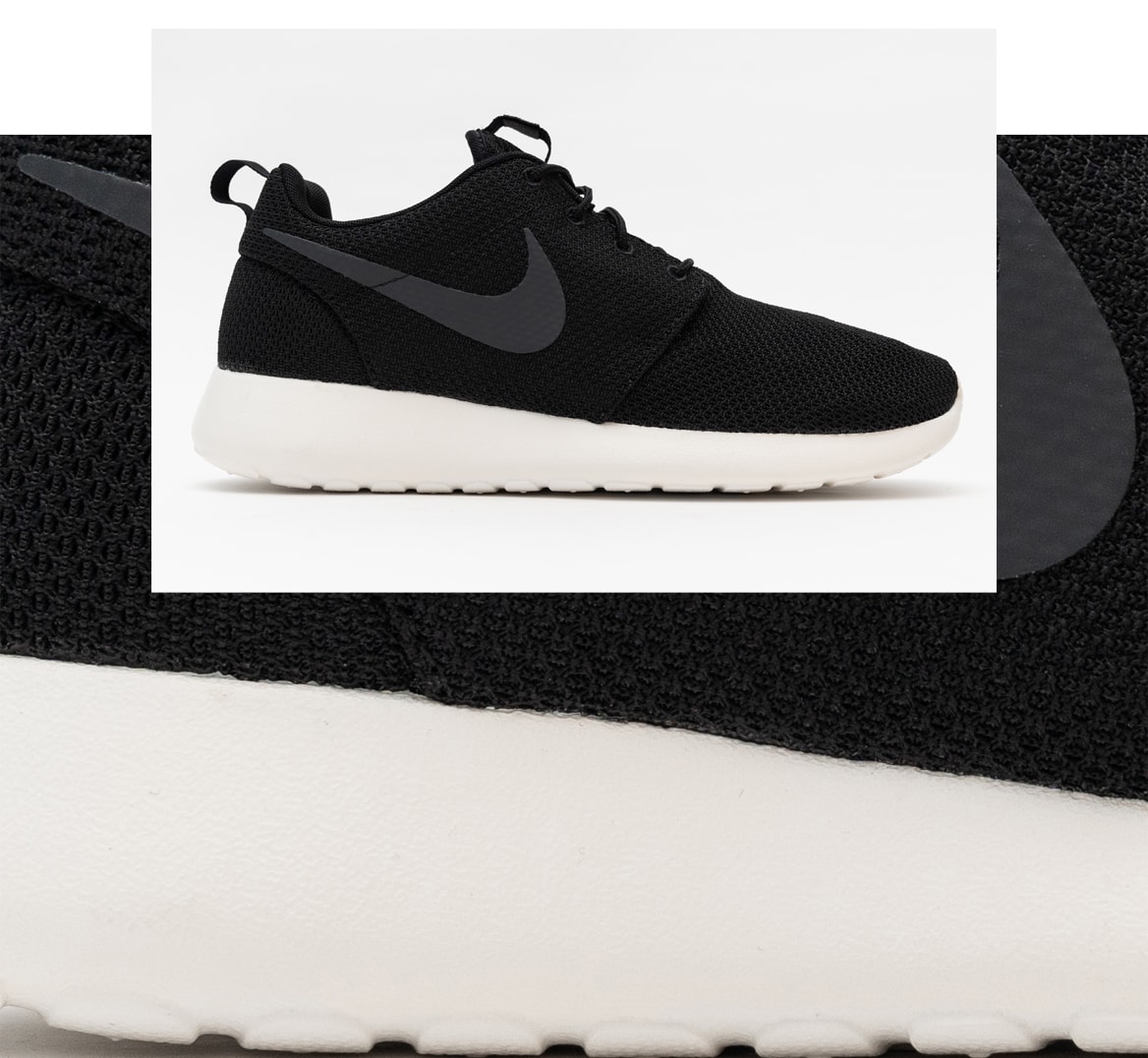 The same year Nike introduced its state-of-the-art Flyknit Racer, it also released the ultra-affordable and now highly-contentious Roshe Run. Dropping without the splendor that came with the Racer, the Roshe seemingly materialized on retail shelves, then vanished just as fast. Its minimal, heavily-cushioned design and low price appealed to everyone, young and old, especially non-runners turned off by in-your-face tech.

For a good two years the shoe was everywhere, both on the streets and social media. Then just as it appeared, the simple, democratic shoe quickly fell out of favor with fashion enthusiasts and sneakerheads alike. It was considered a cheap alternative, in price and design, to the myriad of sock-like runners beginning to hit the market, including the adidas UltraBOOST, and it was soon associated with the fashionably tasteless.

Though it had a short run, the Roshe was still an immensely popular and influential shoe. It may be one of the first true non-performance lifestyle sneakers outside of retro basketball shoes, one that inspired all footwear brands to consider and develop their own minimally-designed and super-comfortable everyday kicks. It was also one of the first sneakers to gain popularity through social media, thanks to a rather skeleton marketing plan and the rise of Instagram. The Roshe made sneaker-collecting more democratic, inviting those who were unaware it even existed. 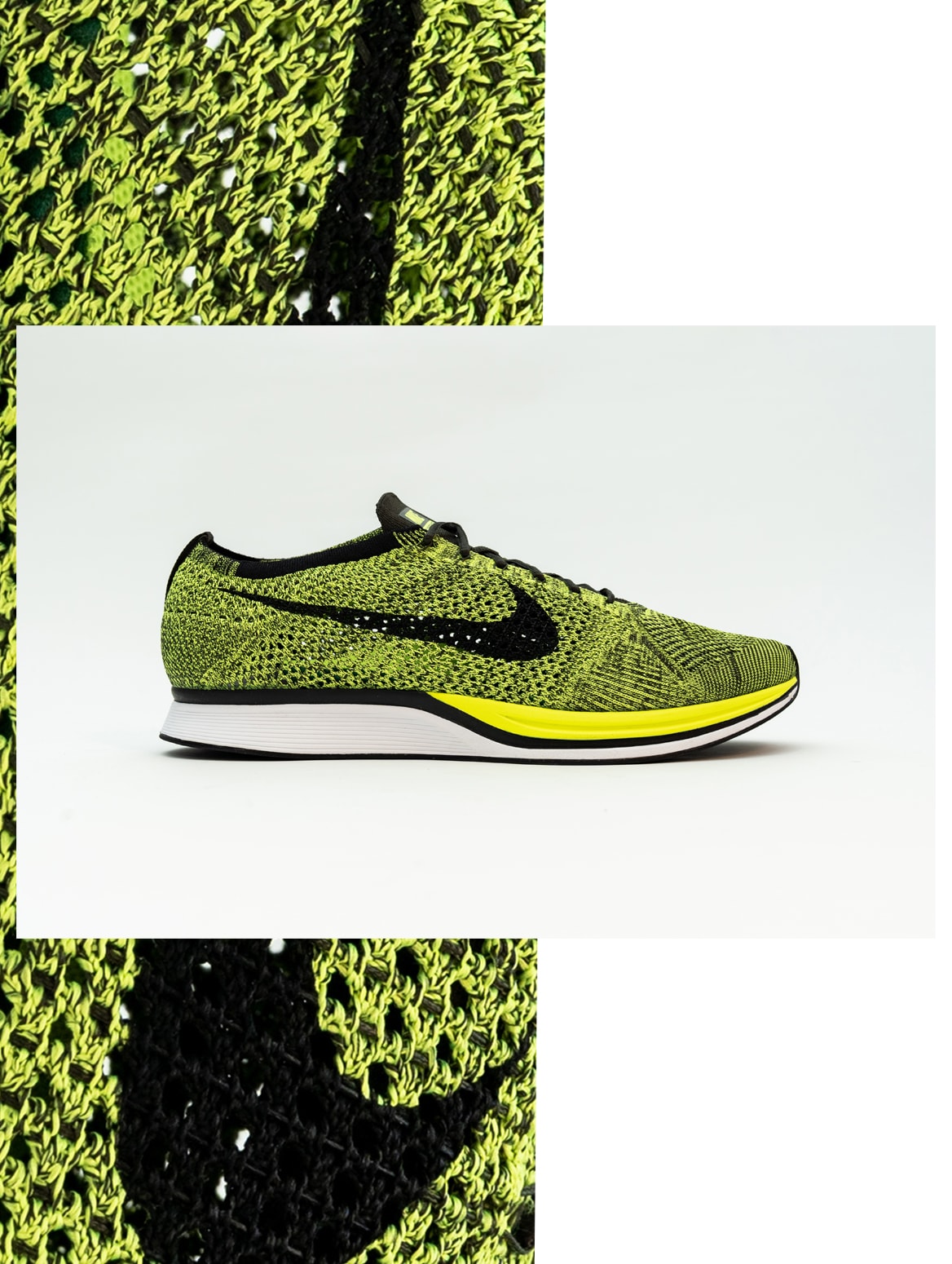 For runners, the 2000s saw less footwear innovation than decades past, as brands honed in on their existing technologies to make shoes lighter and faster with more natural rides — think Vibram’s FiveFingers shoes and Nike’s Free sole. Then, in February 2012 during an Olympic product summit, Nike unveiled its industry-shifting Flyknit technology with the Flyknit Racer (and Flyknit Trainer). This first-of-its-kind performance running shoe featured a one-piece yarn-and-fabric-knitted upper that not only reduced weight but also waste. A 5.6-ounce size 9 Flyknit Racer was said to remove the typical waste associated with making a traditional running shoe by about 80%. It not only excelled in performance but also in sustainability.

Thereafter, the Flyknit Racer set a precedent for the footwear industry; runners wanted the lightweight, form-fitting feel of a knitted sneaker, while brands basked in the cost-effectiveness of machine-built one-piece uppers. The sneaker even excited fashion lovers the world over, as it became the shoe of choice during a time when menswear was transitioning from the suited-and-booted days of the late aughts, to skinny jeans and performance kicks, a precursor to the ever-evolving athleisure genre of today. The Flyknit Racer’s success inspired brands like adidas, Balenciaga, Maison Margiela and others to produce their own knitted, sock-like trainers — a trend that is still alive and well today. 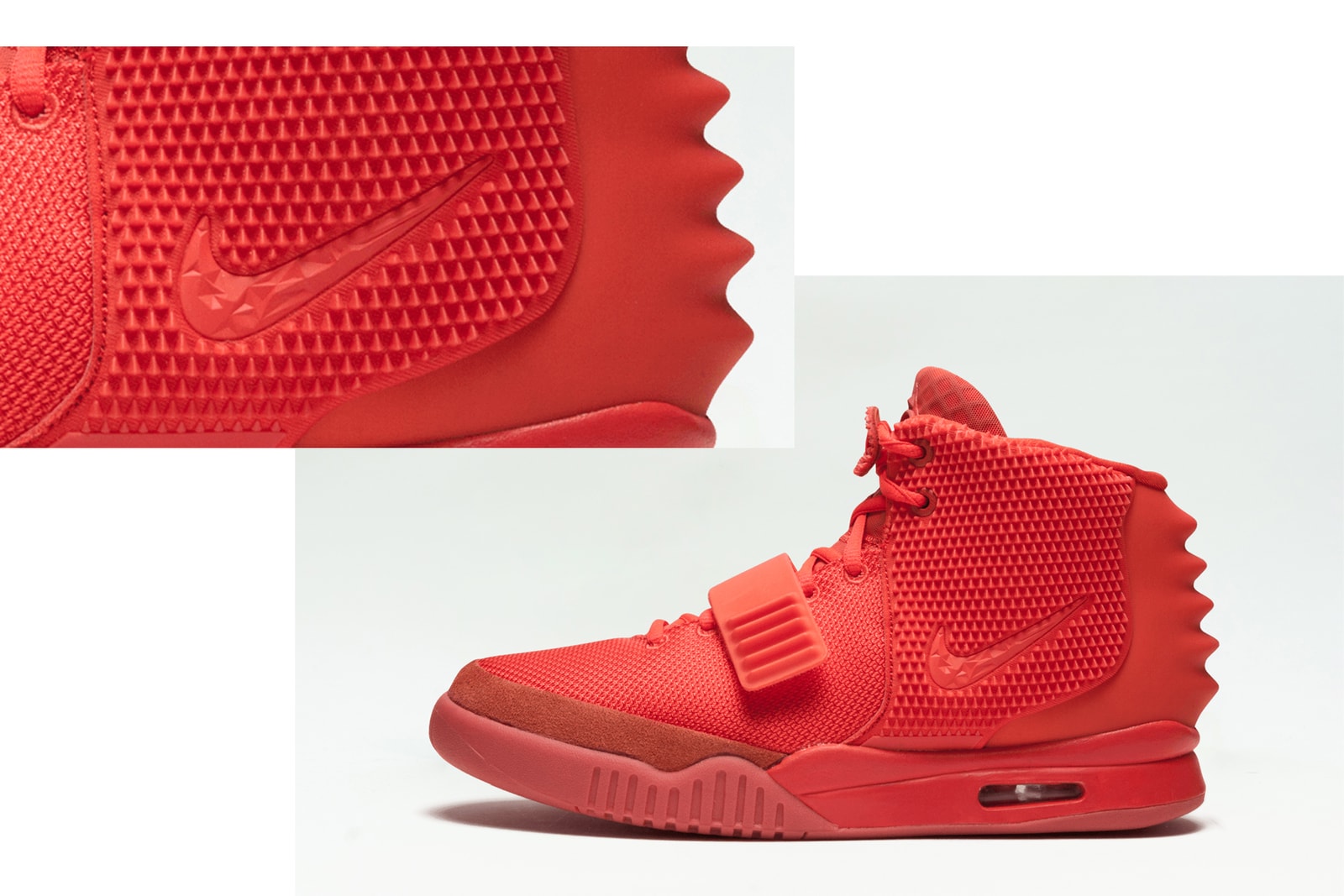 By 2012, Kanye West had become one of the world’s most influential people in all of culture. He had seven platinum albums under his belt, as well as fashion and footwear collaborations with Louis Vuitton, Givenchy, BAPE and Nike. Then, midway through the year, Nike and Kanye followed up 2009’s Air Yeezy 1 — Nike’s first non-athlete signature sneaker — with the Air Yeezy 2.

All the while, fashion’s digital revolution was in full stride, where information and product became more readily available for the global market. More and more people, especially men, began to take a serious interest in elevating their wardrobe and overall taste levels, often beginning with footwear. Consumers researched items and brands endlessly, and when a store didn’t have the product they wanted, they turned to eBay. This movement gave eBay a new lease on life as fashion’s secondary market of choice.

By this time, veteran sneakerheads had fully realized just how lucrative reselling footwear could be, so much so that that same year, StockX (then known as Campless) launched as the first stock market for sneakers. So when Nike finally surprised-released the Air Yeezy 2 “Red October” in 2014, after Kanye had already announced that he was leaving Nike to partner with adidas, the shoe sold out in minutes, with pairs landing immediately on eBay for prices ranging from a few thousand dollars to well over a million. It was yet another viral moment for sneaker culture, where news outlets all over the world began covering the dark world of reselling sneakers.

The “Red Octobers” helped bring what was once a niche, underground world into the mainstream. And that same company who thought to track the value of sneakers on the secondary marketplace in real time is now valued at over a billion dollars.

We also can’t forget that the “Red Octobers” were so popular that over the next few years seemingly every sneaker model released in an all-red colorway.